A few weekends ago, I drove myself to the beach. No partner. No dog. I walked alone for hours.

As I walked, I photographed the beach, full of emptiness and light. Standing at the thrashing eclipse of continent and ocean, I photographed myself smiling at nothing and no one.

Until my beloved Machi died eight months ago, I had never been dogless in Oregon. Never been to a beach without the amplified joy of my dogs. Never wanted to be.

For more than 30 years, my life rhythms revolved around a progression of eight pets: shopping for supplies, feeding, walking, scooping litter, driving to rehab, cleaning bodily fluids from every surface, sitting, sleeping, and working with an array of bodies draped over my own, and endlessly adoring my rag-tag pack.

Until a ricochet of loss in which my relationship with my boyfriend ended and my dog died, followed a few months later by my cat.

I was shedding beloveds and selves like a rose drops its petals: a scatter in the wind.

Who was I without a dog’s desire as my map, Machi’s combative canine inclinations as my hair shirt, my pockets free of poop bags?

As I studied my unaccompanied set of footprints in the sand, the allegory surfaced in which a person is feeling abandoned by God. When she asks why she no longer sees God’s footprints alongside her own at a time of such difficulty, God answers, I would never leave you. During your times of trial and suffering, when you see only one set of footprints, it’s because I am carrying you.

I don’t know what this means to me, exactly. Only that in parallel with absence, I became aware of presence. As I walked, I was keeping time with a chorus of souls. Every being I have loved and lost was somehow with me. Splashing the lens of my life and leaving a salty residue of grief and joy. Making the crescendo of my solitude more precise and penetrating.

Next surfaced these lines from Marge Piercy’s poem All Clear which was taped to my dorm room mirror in my college years:

Loss is also clearance
Emptiness is also receptivity.
No, I cannot pretend:
the cells of my body lack you
and keen their specific hunger.
Yet, a light slants over this bleak landscape
from the low yellow sun,
a burning kite caught in the branches.

There is loss and there is light. There is a gaping space in which we are no longer occupied by the great love that has occupied us. And this gives us room to imagine how to begin again.

The next day, my son wanted to know what happened to the screensaver I’ve had for his entire life: a photo of my dog Henry on the beach in the year 2000—smiling beside an exhausted tennis ball, encircled in a heart-shaped pattern of his own footprints.

In its place was this photo. 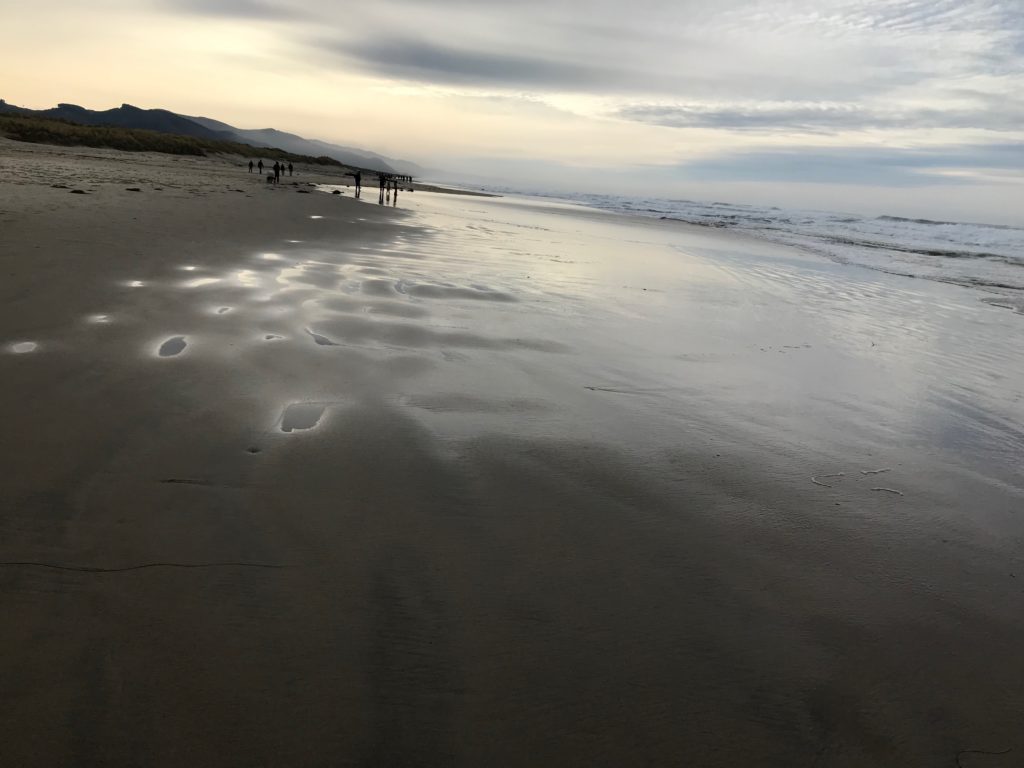 Because this is what our life is like now, I told him. An entire coastline awaiting our footprints.

What surprising grace have you found in loss? And how has writing helped you occupy the empty spaces? I’d love to hear.

16 Comments on “Writing into the places they once occupied”