I spent my late 20’s in a third-floor walk-up on Dolores Street in San Francisco.

My desk (from which I conducted my newborn copywriting business) looked out over a high school football field from which the secondary sights and sounds of teen spirit mingled with my work and my life.

Apartment living compresses community to a 360-degree sensory merger. The choices we make (sounds, smells, cats in the halls spraying everyone’s front doors,) often have an immediate impact on our neighbors.

Most of us were in our 20s and 30s, drastically hip or artistic or professionally successful, trying out identities and ways of being and living. Directly above me lived a man I’d never met but had heard much about from my neighbors.

I was told this man had been living in the building since it opened in the 1940s—which would have put him at least in his early 80’s. And that he’d been stockpiling newspapers and magazines since that time, making his home barely penetrable. (Hoarder, they whispered.)

Also, I was told to be on red alert for groping in the stairwell.

Already about fifteen years deep into my poetry practice, a part of my brain was permanently designated as “witness”. Secretly studying other people, then writing down what I saw, was the practice through which I tried to make sense of my own life. This invisible neighbor of mine sounded more like a character in a short story than anyone I’d ever experienced in person. It seemed strange that I’d never encountered him as I loped up and down three flights of stairs numerous times per day.

Seated at my desk one afternoon, brainstorming the elements of a communications campaign for a healthcare company’s new service, I began to notice a rhythmic sound that rose above the din of football practice.

When the percussion repeated, I tried to locate the sound and make sense of it. If one of my neighbors was holding band practice in their apartment, this was going to be a problem. But the sound seemed to be coming from above, which didn’t make sense.

When the third chorus came from my ceiling, I saw it in a flash: the mystery man had fallen. He was knocking on the floor.

“Are you ok? Did you fall?” I yelled up at my ceiling, hands an improvised bullhorn around my mouth.

Nothing. Followed by more knocking.

I paced around for a minute, nervous system all amped up, uncertain of what to do next. I was fairly certain that I was catastrophizing. I’d seen enough of those, “Help, I’ve fallen, and I can’t get up!” ads to conjure an emergency that didn’t exist.

But when the knocking came again, I had to be sure. Leaping stairs two at a time, I arrived at his door panting and started pounding. Then shouting.

“Are you in there? Are you ok? I heard you knocking…Do you need help?”

No response came from inside. But a few neighbors came out to see what was going on and joined me at his apartment door, speculative and passive. No one had a key. We couldn’t find the building manager. I called 9-1-1.

When the strapping squad of firefighters broke down my neighbor’s door, they fought their way through a ceiling-high tunnel of paper to find a pan on the lit stove burning fish and a man on the floor who could not get up. If we hadn’t found him just then, they said, his apartment and our entire building would likely have gone up in flames.

Somehow, I never saw my neighbor or his apartment throughout the entire rescue. And he never returned to our building. I was told that he suffered a stroke. And, after the hospital, he went to a long-term care facility. Someone came and cleaned out his apartment, spreading rumors of finding naked photos of our mail carrier among the man’s possessions. The man I never knew whose life had overlapped mine in crisis remained a kind of fiction to me. One of my own San Francisco stories.

A few months later, it hit me: Poetry had saved this man’s life — along with the entire apartment building. It was my practice of tuning into what I might otherwise tune out that had brought the firemen to my neighbor’s door.

And though there were far less heroics involved (and no sculpted men in jumpsuits), I understood that my poetry practice has saved my own life, as well.

By creating a space of exploration between event and interpretation, poetry has slowed me down enough to discover that I get to decide what it all means—and this influences how it all feels. When I’ve fallen and I can’t get up, poetry has me curious about the history of the floorboards, the brittle fear of fish burning on the stove, and the muted mercies of newsprint. When neighbors and strangers knock down my doors, poetry is the kindness I seek in their eyes.

I’m so grateful the man lived. The building was spared. My home and my cats were safe, along with all of the other lives that mingled with mine back then. I’m so grateful that when there is nothing to be done, I can write. Which changes nothing—and also changes everything.

All this from being still and willing to listen.

Want to write 30 poems in 30 days—in great company? Join me in the Write a Poem a Day class! Every day in April, you’ll get prompts, tips, and inspiration for your daily poem practice. Plus, share poems, ideas, and feedback with a global community of poets in our private online classroom. Or, explore more ways I can support you in other upcoming events! 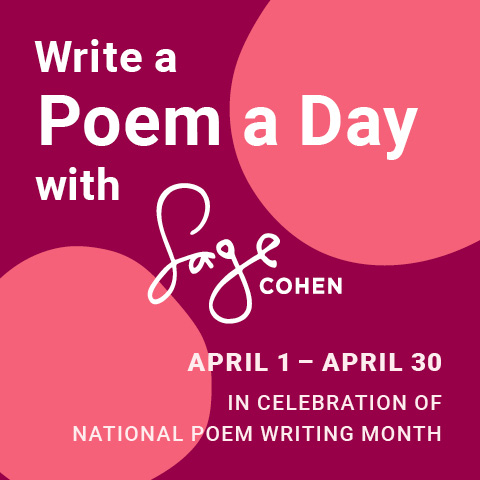